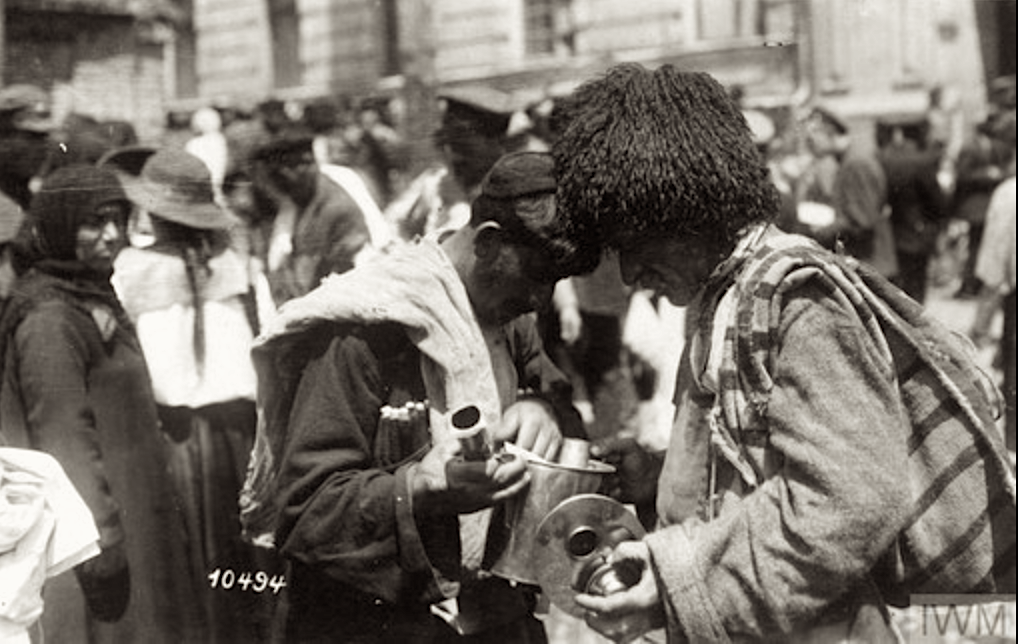 Azerbaijan, Armenia and Georgia marked 102 years since the day of the creation of their states with a democratic structure – that is, independent republics.

The word ‘republic’ comes from the latin word res publica, meaning ‘public issue’. Republic is a form of government with three components:

1. The composition of state departments are either elected for a defined period of time or are formed by national representatives institutions. This role is generally carried out by parliament.

2. An elected head of state who can not pass down their authority by inheritance or in any other way other than elections in which the entire eligible population of the country is included.

3. All citizens of the republic have the same personal and political rights.

In April 1918, the Transcaucasian Democratic Federative Republic was declared, but soon it dissolved into three separate states.

On 26 May 1918, the Georgian Democratic Republic was declared.

On 28 May 1918, the Azerbaijan Democratic Republic and the Republic of Armenia were also declared.

Below are two sections about the achievements of these three states over the past one hundred years, and why they fell apart.

The political context of the time

The beginning of the 20th century was a tragic period for the Caucasus in a number of ways.

By this time, all three countries had been part of the Russian Empire. World War I was taking place, of which a part occurred on the Turkish front.

In 1915 there was the massacre and exile of the Armenian population. Various data sources suggest that about 1.5 million Armenians died. In agreement with Armenia, international organisations and many countries are saying that these events constituted a genocide.

Two revolutions took place in Russia one right after the other. As a result, from 1917 to 1921 the Bolsheviks definitively seized power and the establishment of the communist regime began.

The Independent Azerbaijan Democratic Republic was created on 28 May 1918 in Tbilisi. This took place two days after Georgia declared its withdrawal from the Transcaucasian Democratic Federative Republic.

The federation was administered by the ‘Transcaucasian Sejm’. Its ‘Muslim faction’ practically became the first Azerbaijani parliament.

It was called the national council, with Mammad Amin Rasulzadeh, the head of the ‘Musavat’ (Equality) party as its leader. The chairman of the government of the first Independent Azerbaijani republic was Fatali Khan Khoyski.

The four main achievements of the Azerbaijan Democratic Republic

2. In the decision to create the parliament, there was much discussion about how all of the nations that inhabit Azerbaijan should have a representative. There were two Armenian factions within the parliament.

3. Women in the Islamic world first received the right to vote in Baku. The decision was made in November 1918 simultaneously with Britain, and Azerbaijan gave parity to women on this issue before a majority of European and American countries.

4. The first state university was founded on 1 September 1919 – it had four faculties at first: history, physics-maths, law and medicine.

The first dean of the university was the well-known surgeon Vasili Razumovski. Lev Landau, a theoretical physicist who would later claim a Nobel prize, studied at this university. 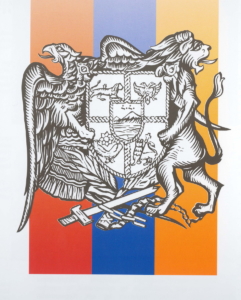 The emblem and flag of the first Republic of Armenia. Photo courtesy of the National Museum of Ethnography of Armenians and the History of the War for Liberation.

The first republic of Armenia was very important for the nation which had been deprived of statehood for centuries.

The achievements of the short-lived Republic of Armenia, just 2.5 years from May 1918 to December 1920, can be summarised as thus:

1. A state body was formed, a parliament elected, an army and internal state departments were also made.

2. Over this period, there were four cabinets of ministers and, accordingly, four prime ministers: Hovhannes Kajaznuni, Aleksandr Khatisyan, Hamo Ohanjanyan and Simon Vratsyan.

3. Diplomatic relations were established and embassies were opened in dozens of countries across the world, from the USA to the far east and the countries of Asia.

4. In August 1918, an official currency, the Armenian rouble, was put into circulation.

Influential Georgian political and intellectual groups did not acknowledge Soviet power which was established in Russia after the revolution of 1917.

On 19 November 1917 the first national convention took place in Tbilisi where the National Council of Georgia was elected – the government.

About half a year later, on 26 May 1918, an Act of Independence was implemented, and thus the Democratic Republic of Georgia was formed.

The Constituent Assembly announces the creation of the first Democratic Republic of Georgia. Photo from the archives of the National Library of Georgia.

2. The Constituent Assembly of Georgia passed the country’s first constitution. This took place on 21 February 1921. The constitution guaranteed the rights of women, religious and ethnic minorities. The death penalty was abolished.

But the first constitution lasted but four days. The Constituent Assembly of Georgia had announced its publication not with national celebrations but under threat from cannonade. The Red Army had already entered Georgian territory. On 25 February 1918, Georgia was annexed.

3. The first international relations were established with Europe after many, centuries-long unsuccessful attempts to make contact with the outside world and get around Russia. The future PM of the UK first came to independent Georgia as well as the acting minister of justice of Belgium. Germany announced itself an ally.

4. In politics, women began playing an active role in Georgia. There were five women among the 130 members of the Constituent Assembly: Minadora Orjonikidze-Toroshelidze, Eleonora Ter-Parsegova-Makhviladze, Kristina Sharashidze, Elisabel-Liza Nakashidze-Bolkvadze, Anna Sologashvili. Their signatures are on the first constitution of Georgia.

5. A court system including a supreme court was set up, in addition to a jury system.

7. Agrarian programmes were instituted as a result of which the majority of land went into the hands of the state, but the citizens were guaranteed an allotment.

Reasons behind the collapse of the first three independent republics

“Had the government of the republic conducted agrarian reforms and passed a labour law and agreed to export oil to Russia, the Azerbaijan Democratic Republic might have continued its existence.

“It would have been socialist, with a slightly religious lean.

“It was the UK that forbade the government to export oil to Russia. And that’s why the 11th Red Army came marching in to Baku in 1920 – oil. If Azerbaijan had exported it, Russia would not have needed to take control of the city. There was some export in 1920, but the process had already begun and it was too late.”

“We do not want to divide the world into small pieces,” is what the president of the US said during a meeting with an Azerbaijani delegation at the Paris Peace Conference where the victor-countries were deciding the fate of Europe after the end of the first World War. He continued:

“ ‘The issue of recognizing the independence of the Caucasian Republics may be looked at after the resolution of the ‘Russia issue’.

“The ‘great states’ believed that there are people who are ready for independence, such as Poland and Finland, and people, such as in Georgia and Azerbaijan, that were not so ready.

“Without international support, small Azerbaijan ended up face to face with Russia. The outcome of the confrontation was predetermined – it wouldn’t have mattered who was ruling Russia at the time.

“In addition, our Turkish brothers made a deal with Bolshevik Russia and they divided the Caucasus into spheres of influence.

“Turkey returned Batumi to Russia, which it had received in the Brest Peace Agreement, but it retained Kars. The only thing that Azerbaijan got from this agreement was autonomy of Nakhchivan ‘under the protectorate of Azerbaijan’.

“But when the Red Army took Baku, Tbilisi and Yerevan one right after the other, Turkey didn’t even bother to interfere.”

Go to top
Historian and leader of the Modern History of Armenia Research Centre, Mikle A. Babayan:

“The Republic of Armenia was destroyed because of the Kemalist-Bolshevik strikes against it, that is in consequence of their active external actions.

“Kemal’s Turkey and the Bolsheviks had their plans and agreed to act against Armenia. The military activities began almost simultaneously, the Bolsheviks entered Armenian territory at the end of November 1918. And before that they had already entered Zangezur, Karabakh and Nakchivan.

“In these conditions, an additional strike was the Armenian-Turkish war which began in the autumn of 1920. Armenia did not have the strength to fight on two fronts.

“Had it not been for Sovietisation, independent Armenia would have gone a different path. The republic’s government had already set goals for several years in advance. It had perspectives and possibilities and could have provided for consistent development.” 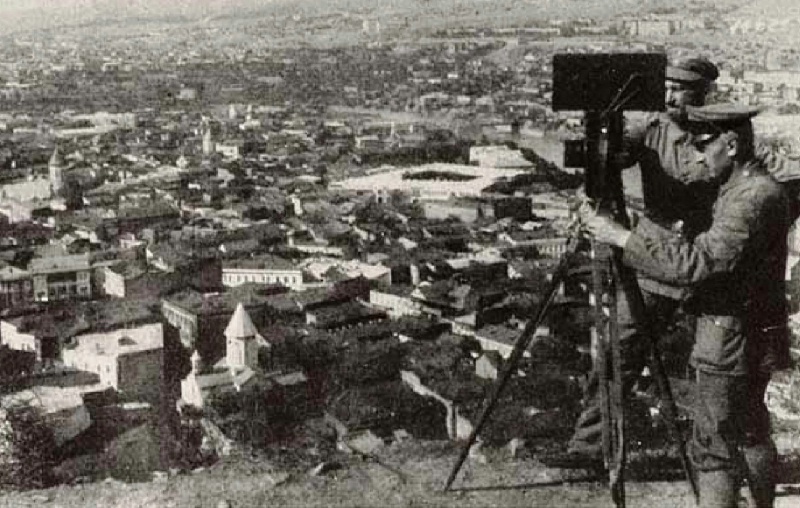 Historian and employee of the Georgian Research Lab on the Soviet Past, Irakli Khvadagiani:

“The first World War did not only stimulate the creation of the first Georgian republic, but it also, to a certain extent, was the reason for its collapse. The first world war changed the entire world order. The international community restored itself after the war and few were interested in the fate of the Caucasus. Georgia, unfortunately, was unlucky in this way: it was not in the spheres of interest of any large power, be it Britain or France. They didn’t see the Caucasus or Georgia as part of their sphere of influence.”

The post What Azerbaijan, Armenia and Georgia did 102 years ago when they became independent republics appeared first on English Jamnews.

Armenia confirmed 442 new coronavirus cases, bringing the nationwide tally to 173,749, Report informs, citing the National Center for Disease Control and Prevention of the Ministry of Health.

The death toll has reached 3,215 as seven moresuccumbed to the deadly pathogen. As many as 164,463 people have recovered from the disease.

There are currently 5,249 active COVID-19 patients in the country.

The novel coronavirus (COVID-19) emerged in late 2019 in China’s Hubei province and has spread to more than 200 countries and territories since then.

A World Health Organization (WHO) team investigating the origins of COVID is planning to scrap an interim report on its recent mission to China amid mounting tensions between Beijing and Washington over the investigation and an appeal from one international group of scientists for a new probe, Report informs, referring to The Wall Street Journal.

The group of two dozen scientists is calling in an open letter for a new international inquiry. They say the WHO team that last month completed a mission to Wuhan – the Chinese city where the first known cases were found – had insufficient access to adequately investigate possible sources of the new coronavirus, including whether it slipped from a laboratory.

Their appeal comes as the US – which recently reversed a decision to leave the WHO – lobbies for greater transparency in the investigation, saying it is waiting to scrutinize the report on the Wuhan mission, and urging China to release all relevant data, including on the first confirmed infections in December 2019.

Moderna coronavirus vaccine can cause skin inflammation and rashes more than ten days after the first vaccination, according to a letter from researchers published in The New England Journal of Medicine, Report informs.

"Here, we report on a series of 12 patients with these reactions, all of which appeared near the injection site after complete resolution of the initial local and systemic symptoms associated with vaccination," reads the letter.

On average, rashes appear on the eighth day after the injection of the first dose, in total, the reaction occurred within 4-11 days.

Despite this, doctors convinced patients to vaccinate with a second dose and complete the immunization. After the second vaccination, only three people experienced skin inflammation of the same intensity, three more had a milder reaction, the remaining half underwent the second vaccination painlessly.