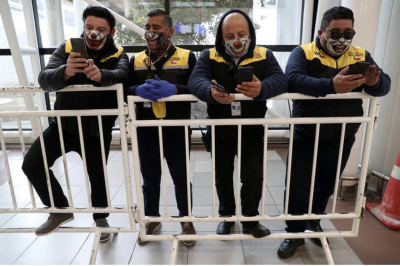 The post Coronavirus in the Caucasus. 50 deaths in Dagestan in a day – experts say the authorities are trying to ‘correct’ falsified statistics appeared first on English Jamnews.

Twenty-nine years ago, the Khojaly genocide was committed, and Khojaly city was occupied by the Armenian armed forces, with the help of the post-Soviet army's 366th Motor Rifle Regiment.

According to Report, today, Azerbaijan marks the next anniversary of the bloody tragedy.

On the night of February 25 to 26, 1992, Armenian forces, with the help of former Soviet 366th Motor Rifle Regiment, invaded the Khojaly village, which was under blockade since October 1991. All roads leading to the city were blocked, and the only available transport was via helicopter. Continuous gunfire began on the evening of February 25, 1992. When 2,500 civilians remaining in the village left their territory with the hope to reach Aghdam, Armenians started to shot at people.

As a result of this tragedy, 613 Khojaly civilians were killed, including 63 children, 106 women, and 70 elderly people. Eight families were annihilated, 130 children lost one of their parents, and another 25 lost both of them. 76 out of 487 people wounded by an enemy bullet were children. 1,275 Khojaly residents were taken prisoner, and 150 went missing.

On the initiative of Azerbaijan's national leader Heydar Aliyev, in February 1994, the Parliament of the Republic of Azerbaijan gave a legal and political assessment of this crime, issuing a resolution. The document describes the causes of the tragedy and its perpetrators.

A monument to the victims of the Khojaly genocide was erected in the Khatai district of Baku city.

Continuing the successful political path paved by the nationwide leader Heydar Aliyev, the President of Azerbaijan Ilham Aliyev has always underlined that the only possible solution to the Armenia-Azerbaijan Nagorno-Karabakh conflict could be within the sovereignty, territorial integrity, and internationally recognized borders of Azerbaijan, and has stated the necessity for the unconditional withdrawal of Armenian armed forces from the occupied territories of Azerbaijan and prosecution of those who committed the act of genocide.

The "Justice for Khojaly" international campaign initiated by Leyla Aliyeva, the Vice-President of the Heydar Aliyev Foundation, General Coordinator of the Islamic Conference Youth Forum on Intercultural Dialogue, is one of the purposeful measures convey the correct information about the Khojaly genocide to the world and achieve the international recognition of this tragedy as an act of genocide against the people of Azerbaijan. Thus, relevant decisions have been made on this genocide act in several countries. It is no coincidence that parliamentarians of 51 countries adopted the respective resolution on recognition of the Khojaly tragedy as an international genocide at the 7th session of the Parliamentary Union of the member states of the Organization of Islamic Cooperation in Palembang, Indonesia in January 2012.

The "Justice for Khojaly" international information campaign is being successfully implemented in dozens of countries and aims to recognize the tragedy at the moral and political level. At present, the parliaments of Pakistan, Mexico, the Czech Republic, Colombia, Bosnia and Herzegovina, and others have recognized the Khojaly tragedy as genocide and criminal act against Azerbaijan. Besides, more than 20 state legislatures of the United States recognized the Khojaly genocide.

President Ilham Aliyev signed a decree on February 13, 2014, on the Justice for Khojaly campaign, given its importance.

The internally displaced persons (IDPs) from Khojaly were temporarily placed in 50 cities and Azerbaijani regions.

On September 27, 2020, the glorious Azerbaijani Army, under the leadership of Supreme Commander-in-Chief Ilham Aliyev, launched counteroffensive to liberate the lands occupied by the Armenian armed forces for almost 30 years. During the 44-day fighting, five cities, four settlements, and 286 villages were liberated.

On November 10, the President of Azerbaijan, the Prime Minister of Armenia, and the President of Russia signed an agreement on a complete cessation of hostilities in the conflict zone. According to the statement, Aghdam was peacefully returned to Azerbaijan on November 20, 2020, Kalbajar on November 25, 2020, and Lachin on December 1, 2020. Thus, Azerbaijan's territorial integrity has been ensured, and the Karabakh conflict has been left behind. Restoration and reconstruction are underway in the liberated areas. Upon completion of all work, IDPs will be able to return to their native lands and homes.

Today Azerbaijan commemorates the 29th anniversary of the mass killing of Azerbaijani civilians by Armenian forces in Khojaly town in Nagorno-Karabakh.

On the night of February 25 to 26, 1992, in violation of all international legal norms, the Armenian armed forces attacked the Azerbaijani civilians in the sieged town of Khojaly, killing them with unprecedented brutality and razing the town to the ground over a course of a few hours. 613 Azerbaijanis, including 63 children, 106 women and 70 elders were brutally murdered on the ground of national identity.

At the same time, 487 civilians were seriously injured and 1,275 people were taken hostage. The fate of 150 hostages, including 68 women and 26 children, is still unknown. During the genocide, 56 people were killed with special cruelty, people's heads were peeled off, various limbs were cut off, their eyes were removed, and pregnant women's bellies were pierced with bayonets. As a result, eight families were completely destroyed, 25 children lost both parents and 130 children lost one parent.

The pre-planned massacre was organized by Armenia's political and state leadership and directly executed by the Armenian armed forces, Armenian terrorist groups in Nagorno-Karabakh and the infantry units of the 366th motor rifle regiment of the former USSR army deployed in Khankandi.

Azerbaijan's official sources report that the nature and scale of the crimes committed in the town of Khojaly proves that the act of genocide fully complies with the definition indicated in the Convention “On Prevention and Punishment of the Crime of Genocide” adopted under Resolution 260 (III) of the UN General Assembly on December 9, 1948.

It was committed with the aim of annihilating the people living in that territory just for the fact that they were Azerbaijanis. Those who committed it also aimed to shake the people who rose up for the defence of their lands from the Armenian armed forces’ aggression and break their will to fight.

Khojaly villagers were beheaded, had their eyes gouged out, skinned, and burned alive. Those trying to flee were killed with a particular brutality by the Armenian troops who ambushed them on roads and forests. Khojaly does not differ from horrific tragedies of Katyn, Lidice, Oradour-sur-Glane, Holocaust, Songmy, Rwanda and Srebrenica, which are etched on the minds of people forever.

Late national leader Heydar Aliyev formerly stated that the Khojaly genocide, which once again exposed the face of the Armenian fascism, is a crime against not only the people of Azerbaijan, but also against the entire humanity. It must be condemned by the civilized world in compliance with international law.

The Azerbaijani law-enforcement agencies continue to take appropriate steps to identify and prosecute the persons responsible for committing genocide in the town of Khojaly.

Azerbaijan has set as its task to convey the truths, based on real facts and evidence, about the Khojaly genocide as well as the atrocities committed against Azerbaijanis in the Nagorno-Karabakh region to the world community, parliaments, public organizations in order to achieve recognition of these events as a real act of genocide. Ensuring proper international legal and political assessment of the tragedy and punishment for its ideologists, organizers and perpetrators is regarded to be a crucial precondition for preventing such brutal acts from being repeated against humanity in general.

Relevant documents adopted by the parliaments of Mexico, Pakistan, the Czech Republic, Peru, Colombia, Panama, Honduras, Sudan, Guatemala and Djibouti recognized the Khojaly massacre as an act of genocide. The parliaments of Romania, Bosnia and Herzegovina, Serbia, Jordan, Slovenia, Scotland and Paraguay, as well as the executive and legislative bodies of 22 U.S. states have strongly condemned the Khojaly tragedy as a massacre. The Organization of Islamic Cooperation recognized Armenia as an aggressor and the Khojaly tragedy as genocide.

The promotional activities carried out under the Justice for Khojaly campaign organized by the Heydar Aliyev Foundation is widely spreading every year. As part of this campaign, Azerbaijan raised a petition calling on everyone to sign a petition in the name of establishing historical justice, in order to avoid the repetition of such crimes against humanity! Below is the link for signing the specified petition.

“The world must recognize the Khojaly genocide”, “Justice for Khojaly”, “Do not forget Khojaly”, “No to Armenian fascism”, “Khojaly – genocide of 20th century”, “The criminals won’t go unpunished’ and other slogans are displayed on huge monitors along the streets during the rallies to commemorate the genocide every year.

Story will be updated.

Suzuki Motor chairman to retire after over 40 years at helm

Erdoğan: Joint efforts of Turkey and Georgia will make a great contribution to stability in region

Apple to collaborate with Hyundai on its first electric car model

Anna Hakobyan faces protests upon arrival in US