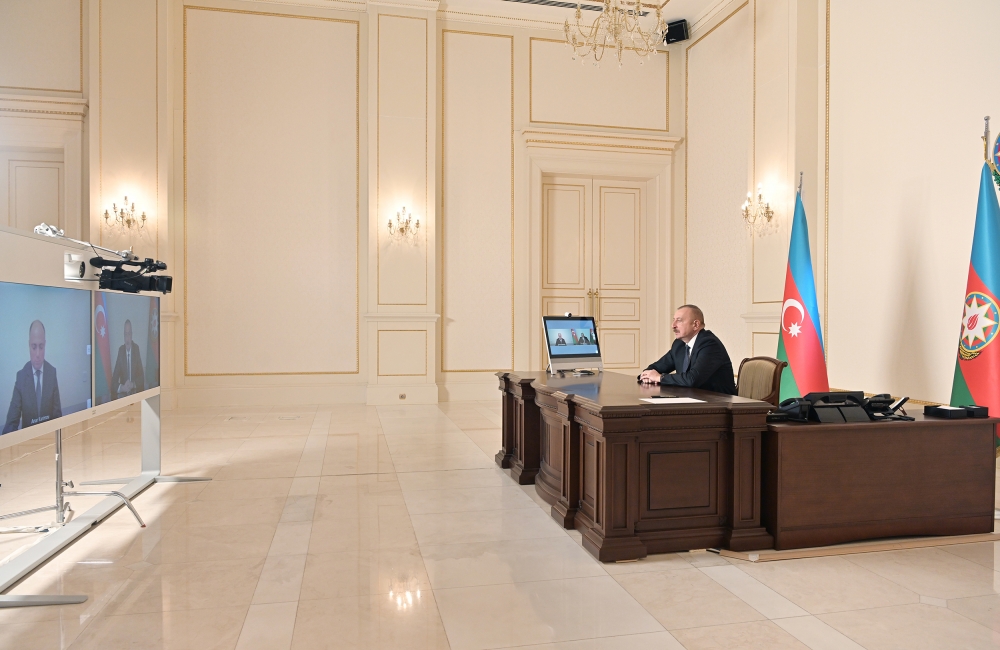 Azerbaijani President Ilham Aliyev has threatened UNESCO with a ‘revision of relations’ if the organization does not ‘maintain its international status’ and does not cease ‘being a branch of any country’, claiming UNESCO works for the ‘Armenian lobby.’

Aliyev said this during a reception in video format of the new Minister of Culture Anar Kerimov.

Kerimov had been the first deputy head of the Ministry of Culture for several months and acted as minister after the dismissal of the former head of the department, Abulfas Qarayev. Prior to his appointment, Deputy Minister Anar Kerimov represented Azerbaijan in UNESCO.

“Who can accuse us that the monuments of other religions in Azerbaijan are under threat? Inexperienced politicians, populists, some so-called ‘politicians’ who are not aware of our region, but fulfill the order of the Armenian lobby or work for it, may have some claims against us.

Are these claims substantiated? No. These words of mine prove our deeds, which will last for several volumes. Let them go and see what the Armenians have turned our monuments into?!” said Aliyev.

“Why hasn’t UNESCO raised this issue for 30 years? We have applied many times, more than once. These appeals are documented in the form of letters. Two years ago, the new leadership of UNESCO was also invited to send a mission. Let a mission come to the occupied lands, see what they have turned our historical monuments into?

“I said, open your eyes and see what the Armenians have turned our mosques into. Was there any reaction from there? No! It was destroyed by the Armenians. What have we destroyed? What have we done? We just repaired them and took care of them. Therefore, you know, we simply cannot ignore such an unreasonable approach.

We are ready to continue to cooperate with UNESCO. But on one condition, UNESCO must maintain its international status. UNESCO is not affiliated with any country. If this approach prevails in our relations, then there will be cooperation. If not, this cooperation can be revised,” Aliyev said.

Views: 9
Related Topics:
Up Next

Thirty-one years have passed since the events of January 20, 1990, which are went into history as the tragedy of 'Black January.'

On the night of January 20, 1990, the former Soviet military troops attacked Baku by the land and sea and carried out the punitive measures with unprecedented cruelty. As a result of this accident, 133 innocent civilians, including the children, women, and the old, were killed, 744 wounded, and 841 illegally arrested. The terrorist savagery attack of the Soviet army against Azerbaijani people carried out by order of USSR President Mikhail Gorbachev was written in the history of humanity in black letters as one of the worst crimes committed against humanity.

During the January 20 tragedy, the news was put under a blockade in the country; armed militants brutally exploded a power block of radio and television, the media was banned. The aim was to make the people unaware of this tragedy. On those hard days of peoples, on January 21, Heydar Aliyev arrived in Azerbaijan's representation in Moscow and spoke at the meeting. He stated that he stands by his people. He also assessed the January 20 tragedy from a political point of view. Heydar Aliyev said that it is the action against democracy and humanism and the rude political mistake made by the leaders of that time's republic. The text of Heydar Aliyev's historical speech was widely circulated in the country and around the world. The helpless people began to live with the light of trust and hope in their hearts.

In 1993, after the return of the national leader Heydar Aliyev to political power, essential steps were taken on the investigation of the causes of the outbreak of the January 20 events and the sentence of the offenders. Significant measures were taken to inform the world about the January 20 tragedy, its place, and its role in Azerbaijan's history and perpetuate it.

Milli Majlis ratified a decision on March 29, 2004, about the tragic events of January 20, 1990. Thus, as a result of President Heydar Aliyev's insistence, January 20 tragedy was marked at the state-political level, and the names of the offenders were openly stated.

"For us, the MAX will be able to fly again starting next week," after the publication of a directive, EASA director Patrick Ky said in a video conference.

"We have reached the point where our four main demands have been fulfilled," Ky said during the conference, organized by the German association of aviation journalists.

The MAX was grounded in March 2019 after two crashes that killed 346 people — the 2018 Lion Air disaster in Indonesia and an Ethiopian Airlines crash the following year.

Investigators said the leading cause of both crashes was a faulty flight handling system known as the Maneuvering Characteristics Augmentation System or MCAS.

Meant to keep the plane from stalling as it ascends, the automated system instead of forced the plane's nose downward.

The findings plunged Boeing into crisis, with more than 650 orders for the 737 MAX canceled since last year.

Producer David Richardson, one of the screenwriters of the animated series The Simpsons, has died at the age of 65, Report states, referring to Deadline magazine.

He passed away because of heart failure. Richardson's family plans to hold the funeral closed to the public. A mass farewell will be held after a while.

Richardson is the author of several television comedies.

Egypt to be self-sufficient in petroleum products by 2023

Eight regional landfills for waste to be established in Azerbaijan