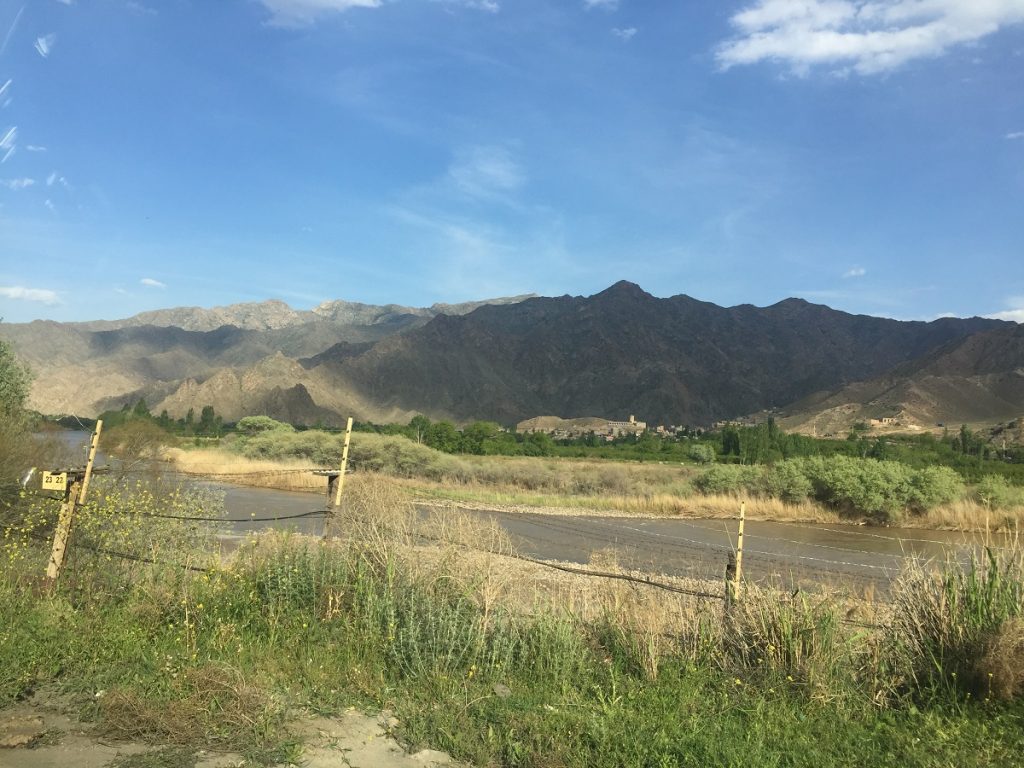 In an interview with the Azerbaijani state television, President of Azerbaijan Ilham Aliyev touched upon the issue of the “Zangezur corridor”, which should connect the western part of the country with its exclave – Nakhichevan. Aliyev’s harsh statement sparked an angry reaction in Armenia.

How likely is a union agreement between Azerbaijan and Turkey? – commentary from Baku

Geopolitical changes in the region pose a real threat to the independence of Azerbaijan. Politician Natik Jafarli considers the alliance agreement with Turkey the only salvation of the country

What did Aliyev say?

In an interview with AzTV, President Ilham Aliyev said:

“The creation of the Zangezur corridor fully meets our national, historical and future interests. We are implementing the Zangezur Corridor, whether Armenia wants it or not. If Armenia wants it, then the issue will be resolved easier, if it does not want it, we will decide it by force. Just as before and during the war, I said that they must leave our lands, or we will expel them by force. And so it happened. The same will be the fate of the Zangezur corridor.

Our main rival is time, because the construction of a railway and a highway takes time. Therefore, all forces have been mobilized for the implementation of this project. Thus, the Azerbaijani people will return to Zangezur, which was taken away from us 101 years ago.”

What does the tripartite agreement say?

According to the trilateral agreement signed by the Presidents of Azerbaijan, Russia and the Prime Minister of Armenia on November 10, 2020, the main part of Azerbaijan and Nakhichevan will be connected by a transport line passing through the territory of Armenia.

Terms of the Karabakh truce – corridors, boundaries and peacekeepers

What was set down by trilateral agreement on Karabakh signed on November 10 between Azerbaijan, Armenia and Russia and what remains unclear

“All economic and transport links in the region are being unblocked. The Republic of Armenia guarantees the safety of transport links between the western regions of the Republic of Azerbaijan and the Nakhichevan Autonomous Republic in order to organize the unimpeded movement of citizens, vehicles and goods in both directions. Control over transport communication is carried out by the bodies of the Border Service of the FSB of Russia.

By agreement of the Parties, the construction of new transport communications linking the Nakhichevan Autonomous Republic with the western regions of Azerbaijan will be ensured.”

The statements of the Azerbaijani President were commented on by the press secretary of the Armenian Foreign Ministry. According to Anna Naghdalyan, Armenia will take all necessary measures to protect its sovereignty and territorial integrity:

“Such statements seriously undermine the regional peace and stability. They reveal the false nature of Azerbaijan’s recent statements on peace and reconciliation. It is noteworthy that such threats are made on the eve of the commemoration of the Armenian Genocide; they are intended to speak to the Armenian people from a position of force.

We are in constant touch with our strategic ally, as well as with all our partners interested in peace in the South Caucasus.”

Human rights defender of Armenia Arman Tatoyan called the statement of the President of Azerbaijan on the “Zangezur corridor” evidence of the policy of genocide:

“It contains intimidation of the entire population of Armenia, which is absolutely prohibited under international law. All this is done by openly distorting historical facts, presenting Zangezur as an Azerbaijani historical territory. “

The Human Rights Defender of Armenia believes that the President of Azerbaijan, especially after the war in September-November 2020, makes statements testifying to the fascist policy:

“Professional studies of the Human Rights Defender’s Office of Armenia confirm that exactly this Azerbaijani state policy was the basis of atrocities, beheadings alive, torture, and other war crimes committed by the Azerbaijani Armed Forces against civilians and servicemen of the Armenian side during and after the war.”

The Ombudsman, once again, called on international structures to pay attention to “these genocidal and fascist statements.” He believes that it was the silence of the international community that led to new cases of cruelty and numerous violations of the rights of the Armenian population by Azerbaijan.

Nikol Pashinyan believes that the Azerbaijani president, with his rhetoric, wants to disrupt the process of unblocking regional communications:

“The situation is even more aggravated against the background of provocative and indiscriminate statements of the Azerbaijani leadership. These statements contradict each other. On the one hand, the President of Azerbaijan declares that he has no territorial claims against Armenia, on the other hand, he speaks of the opening of the Zangezur corridor by force.”

He again stressed that the trilateral statement of November 9, 2020 does not mention “Zangezur”, that is, the Syunik region of Armenia, there is no word “corridor” there, and it is only about unblocking regional communications:

“In the Moscow statement of January 11 [2021], we clearly laid down what should happen. If Azerbaijan talks about the “Zangezur corridor”, then the Armenian leadership can talk about the Nakhichevan corridor, the North Azerbaijan corridor. Azerbaijan can get the same “corridor” that Armenia will get through the Azerbaijani territory. “

The transit corridor, which was agreed by the leaders of Armenia, Azerbaijan and Russia, in the opinion of Armenian experts, does not promise the country anything except “regular geopolitical risks”

Leyla Abdullayeva, the head of the press service of the Ministry of Foreign Affairs of the Republic of Azerbaijan, stated that “the head of the Azerbaijani state, as always, expressed himself quite clearly and concretely.”

“If the Armenian Foreign Ministry wants to present what it hears, the way it wants, this already testifies to their hated intentions.

I would like to inform those wishing to interpret the opinion of the head of our state in their own way that the President of Azerbaijan in an interview on April 20 spoke about possible revanchism in Armenia directed against Azerbaijan and about threats to our territorial integrity. He stated that “if we find a possible threat, we will immediately stop it. <…>, since this is “a matter of national defense, a matter of national security.”

This is not a threat to the territorial integrity of Armenia, as the RA Foreign Ministry claims, but an indicator of our determination to respond to any threat that may arise from the Armenian side within the internationally recognized borders of Azerbaijan.

I would like to remind you that in an interview, the head of state also announced Azerbaijan’s readiness for cooperation, stressed that, despite the genocide committed by Armenia against Azerbaijanis at the state level, and the destruction of our historical, cultural and religious monuments, we must be focused on the future.

As has been repeatedly stated at the highest level, Azerbaijan is ready to normalize relations with Armenia on the basis of the principles of international law, in particular the sovereignty of states, territorial integrity and inviolability of international borders.

This is also facilitated by the implementation of the trilateral statements signed on November 10, 2020 and January 11, 2021. Armenia, on the contrary, poisons the consciousness of its population with false and slanderous statements and tries to mislead the international community, ”she said.

Has the construction of the “corridor” begun?

Some Azerbaijani media published news, according to which the Turkish state announced the start of construction of the “Zangezur corridor”.

This news has not been officially confirmed.

Views: 83
Related Topics:
Up Next

Why is Zangezur (Syunik) often mentioned in Azerbaijan? – commentary from Baku