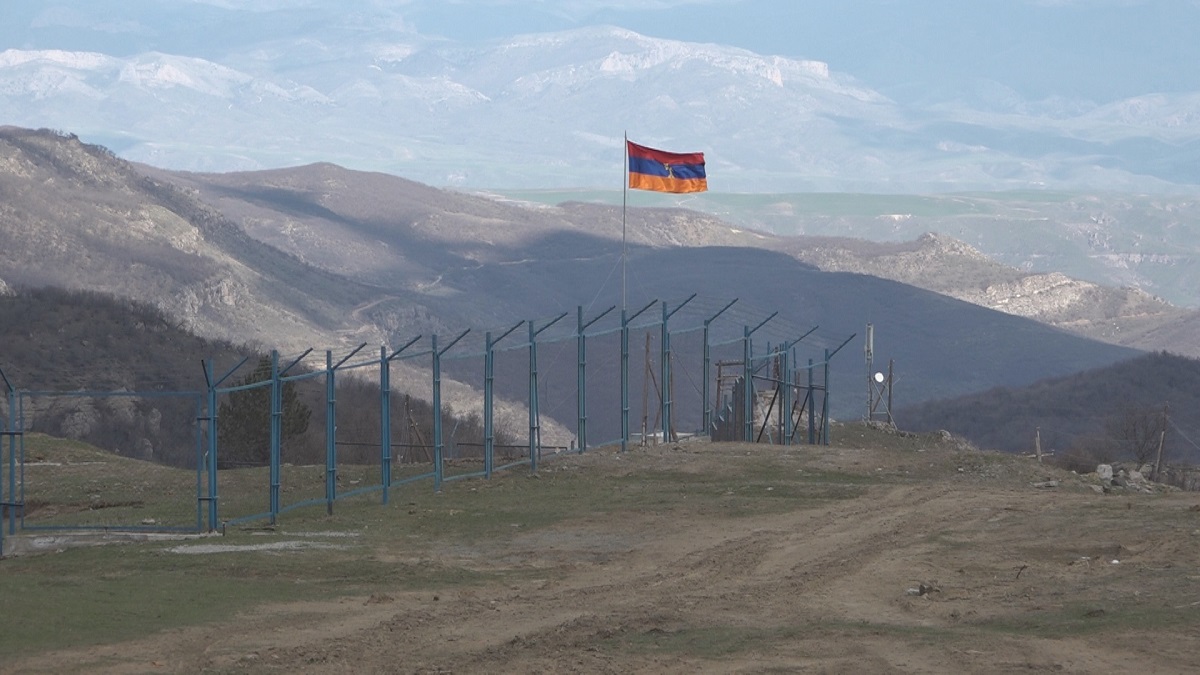 The ‘new border’ with Azerbaijan is the result of the second Karabakh war and a painful issue for the whole of Armenia.

Following the end of the second Nagorno-Karabakh war in the fall of 2020, territories which were previously controlled by Armenia came under the control of Azerbaijan, thus returning the old Soviet borderline that formerly ran between the two republics.

Some sections of the highway connecting the capital of Armenia with the southern region of the country came under the control of Baku and the inhabitants of the villages divided by the new border do not feel protected.

The escalation of the Nagorno-Karabakh conflict in the fall of 2020 directly or indirectly affected virtually every resident of Armenia. Some were directly involved in the hostilities of the 44-day war while others helped the army or refugees. Therefore, the outcome of the war shocked everyone, the defeat of Armenia caused not only a political, but also an emotional crisis in the country.

The consequences of the war and the loss of territories have affected the inhabitants of the southern region of the country, Syunik the most. Many villages here have become borderlands much like they used to be during the Soviet period, as the territories adjacent to Nagorno-Karabakh came under the control of Azerbaijan. Many villages ended up being divided into two parts controlled by Armenia and Azerbaijan respectively.

The road to Azerbaijan

The republican highway Goris-Kapan, which connects Armenia with Iran, is now functioning as usual. However, everyone who travels along the highways often finds themselves entering the territories of Azerbaijan․

From time to time, one comes across signs in the Azerbaijani language that welcome them to Azerbaijan and indicate that one has entered the Gubadli region of the country.

After the significant loss of territories in Nagorno-Karabakh, a new border has been drawn between Armenia and Azerbaijan. As a result, some sections of the Goris-Kapan highway were officially declared Azerbaijani territory and the posts of the Azerbaijani Armed Forces have been relocated there.

At the beginning of the journey, the officers of the border troops of Armenia warn everyone passing against stopping for the next five kilometers in order to avoid possible incidents. However, the highway is only a part of the larger problem that the local residents are faced with.

The new border between Armenia and Azerbaijan cut the Armenian village of Shurnukh into two parts and the road became the dividing line. All houses to the ease now belong to Azerbaijan, while the ones to the west remained in Armenia.

Russian border guards are stationed between the warring parties. The Russian flag and armored personnel carriers act as a kind of symbol and guarantee of security and peace. However, local residents are still anxious about what the new reality may bring.

How to live on the borderline without fear

During the several months of Shurnukh being divided into two, no serious incidents have been recorded. The only subject of discussion has been cattle stealing by the Azerbaijani military.

However, peace in these places can only be temporary as the Azerbaijani flag, tents, and soldiers located only 20 meters away prevent locals from feeling safe and at ease.

“I’m not afraid for myself, I’m worried about the youth. What is there to fear, I am 76 years old, maybe I will not be alive in the next five years”, says Armen Gevorgyan, a resident of Shurnukh.

He has a small family – a son and a wife. They, like 11 other families, were forced to leave their homes, which remained on the Azerbaijani side.

Armen said that for 20 years he built a house with his own hands and almost finished, but lost it overnight:

“There was an order to leave the house. I have not seen weapons [among the Azerbaijanis]. They didn’t shoot. Much of what was there had to be left there”.

The villagers themselves and the whole of Armenia learned that Shurnukh would be divided into two parts on the eve of the demarcation process of the new border.

Most of all, both people and experts were surprised by the principle of determining the new border, as it was done using the GPS system and Soviet maps dating back to the 1970s.

What is going on at the border?

The process of revising the borders between Armenia and Azerbaijan should be suspended or revised, as it is illegitimate, the Ombudsman of Armenia Arman Tatoyan has repeatedly stated:

“The process of border demarcation is carried out with gross violations of human rights and the rule of law. Such a demarcation of borders will not only not contribute to the establishment of peace in the region, but, to the contrary, may contribute to the incitement of hatred between the Armenian and Azerbaijani peoples. This process undermines the international human rights framework.

The process of determining the state borders of Armenia is taking place under the threat of war. The presidents of Azerbaijan and Turkey threaten the people of Armenia with genocide and ethnic cleansing. The leadership of Azerbaijan, following Ilham Aliyev, insults the dignity of the citizens of Armenia and provokes interethnic enmity. There are no professional approaches to border demarcation, and instead, unacceptable mechanical approaches such as GPS are used”.

The Ombudsman also considers it unacceptable that the posts of the Azerbaijani Armed Forces are located in the immediate vicinity of civilians, and the Azerbaijani military periodically shoot from weapons of various calibers.

Arman Tatoyan also raises another important issue – residents of the border region now do not have access to pastures and fields that they have been using for many years.

All these issues have been addressed in letters which the Ombudsman has sent to the OSCE Chairman-in-Office, the Secretary-General of the Council of Europe and the UN, the Council of Europe and UN Commissioners for Human Rights, the Presidents of the PACE, and the OSCE PA, the President of the ECHR, the PACE Co-Rapporteurs on Azerbaijan and Armenia, as well as ombudsmen of several countries.

Meanwhile, the prime minister of Armenia stated that what is happening on the new border between the countries is not a process of demarcation and delimitation, but simply the location of certain border points which is carried out to ensure the safety of residents of the southern region of the country – Syunik.

Yet, there are no diplomatic relations between Armenia and Azerbaijan to agree on any issues, including the borders.

The problems of the residents of Shurnukh

Not only the village of Shurnukh has been divided into parts, but also some of the houses of the village too. Laura Tovmasyan lost two-thirds of the barn and the border runs right through the territory of her private home so her family was literally placed on the dividing line between the two countries:

“They do not bother us at the moment. Borders are not crossed. Except for one case when the military came to our home and asked for tea. There was a man with them who filmed all this on camera. They asked questions about our pensions, then this video was disseminated in Azerbaijan”.

To exclude such cases, the border troops of Armenia were stationed in the village school. The Armenian and Azerbaijani posts are located only tens of meters from each other. There are a lot of videos on social media depicting the military personnel of the two countries talking to each other.

To completely rule out any incidents and assert their rights to the rest of the village, the municipal authorities installed a huge Armenian tricolor and a cross in the center of the village.

On the outskirts, a new block of houses of the same type is now being built. 12 families who have lost their homes will settle in them as this way, the local authorities hope to keep the people safe and preserve the village.

What will happen next?

In Shurnukh, calmness can be deceiving. Residents understand that with the escalation of the situation in Karabakh, they may also be under fire. But despite all possible threats, so far only one family has left the village.

“People intend to stay here. However, everyone has fear in their hearts. You do not know what the next step of the enemy will be. But personally, our family, my son, who works at the school, we are going to stay in Shurnukha. We have been living here for 30 years and do not want to leave our homes. We stand firmly on our border”, says Laura Tovmasyan.

Can Armenians and Azerbaijanis live in such proximity? After so many years of hostility, it is difficult to imagine, although circumstances may force people to turn a blind eye to the potential danger. Armen Gevorgyan, a resident of Shurnukh, says that he cannot imagine a peaceful life with Azerbaijanis:

“Maybe there will be Armenians who will be able to get closer to them, I will not be able to. I know them well, for 20 years I worked as a trip chauffeur on the Baku-Yerevan tours”.

Shurnukh is not the only settlement located right on the border. The villages of David Bek, Vorotan are also in close proximity to Azerbaijan. While in Shurnukh the situation is generally calm, in other places from time to time there are dangerous incidents do occur.

For example, local residents reported that on the Goris-Kapan highway near the village of David Bek, Azerbaijani soldiers threw stones at a car with the Armenian number plates.

“This incident confirms the relevance of the concerns voiced by the Office of the Ombudsman of Armenia over the need to create a security zone in Syunik. There should be no Azerbaijani soldiers, signs, and flags on the intercommunal roads in the neighborhood of villages in the Syunik region”, Armenian human rights defender Arman Tatoyan said immediately after the incident.

However, the Azerbaijani military is not only close to the Armenian villages, but also to the airport of the city of Kapan, one of the largest settlements in the south of Armenia.

The demarcation of the border is yet to come, but this process is unlikely to change the situation. Armenia will clearly have to build a new road to avoid further accidents in certain areas.

The situation in the Syunik region will remain more or less calm until they start shooting again in Karabakh.

With the assistance of the Russian Language News Exchange

Views: 36
Related Topics:
Up Next

Head of Gagauzia to visit Azerbaijan