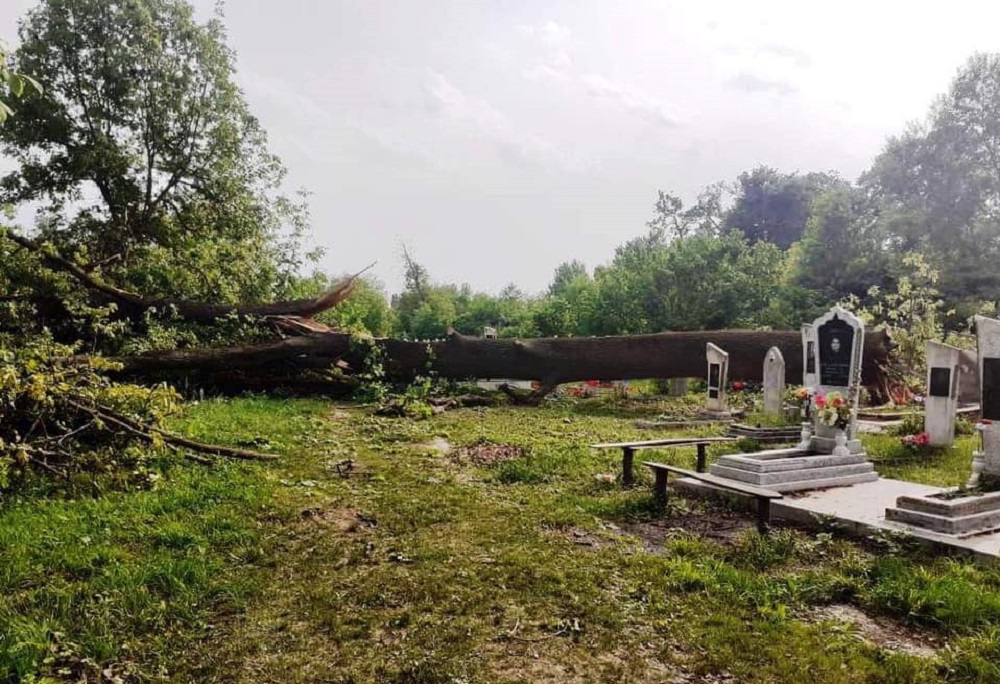 Azerbaijani eco-activists protested against the cutting of trees in a cemetery in one of the villages of the Gakh region of the country. In turn, the villagers claimed that there was a risk of trees falling on the graves, and criticized the activists who were then forced to delete their statement from social media, and the state intervened in the matter.

Recently, a message appeared on the Facebook page of Azerbaijani eco-activists about the cutting down of three huge trees in the cemetery of the village of Zeyem in the Gakh region of the country. Local residents justified their actions by referring to the risk of old trees falling on the graves.

Some users of the social media supported the villagers and noted that the gravestones are very expensive, and if trees of such a size fall on them, no one will compensate people for their material losses.

In turn, the villagers criticized the eco-activists for revealing the exact place where the tree-cutting took place and after the continuous attacks, the report was subsequently removed from the Eco-front webpage.

The case was transferred to the prosecutor’s office

On April 28, 2021, the Ministry of Ecology and Natural Resources of Azerbaijan issued a statement.

The statement says that the employees of the department confirmed the cutting down of three trees in the municipality of Zeym Gakh region.

“Nature suffered damage that can be amounted to 6,600 manats [3.882 US dollars]. The indicated amount is a part of the criminal case which has now been transferred to the prosecutor’s office”, the ministry said in a statement.

“The Ministry only works on complaints”

Javid Gara, leader of the Azerbaijani movement Eco-front, believes that one of the main reasons for environmental problems in the country is the lack of funds for the Ministry of Ecology and Natural Resources.

“The budget of the state television exceeds the budget of the Ministry of Ecology. Under the guise of optimization, the potential of the department was reduced many times, there is a shortage both in the number of employees and, for example, in the provision of fuel.

All environmental protection work is based on complaints. There are no resources for organizing the proactive protection of nature”, says Gara.

Javid Gara believes that the ministry is powerless even when facing middle-class businessmen.

“The species included in the Red Data Book are left to fend for themselves, we can only wait until they are completely exterminated. There is no strategy, not even the resources to prepare such a strategy.

There is a need for a serious nationwide protest. We are not chasing popularity, and there is no time to waste. We must sit down and think. What can we do to convince the authorities to start working to overcome the environmental crisis?”, he added.

The decision to fine those guilty of cutting down trees in the village cemetery became a topic for discussion in Azerbaijani social media. Here are some typical comments:

“I don’t understand what it means to not indicate the name of the village? People need to know where it happened”.

“We shouldn’t have fined them, but forced them to plant 6,600 trees instead.”

“Sometimes poverty forces people to cut down trees. I remember how in the 90s there was no gas in Nakhichevan, and forests were cut down massively. With a pain in my heart, I watched all this, and this is one of my saddest childhood memories”.

Views: 22
Related Topics:
Up Next

British ambassador: I was impressed by kelagai