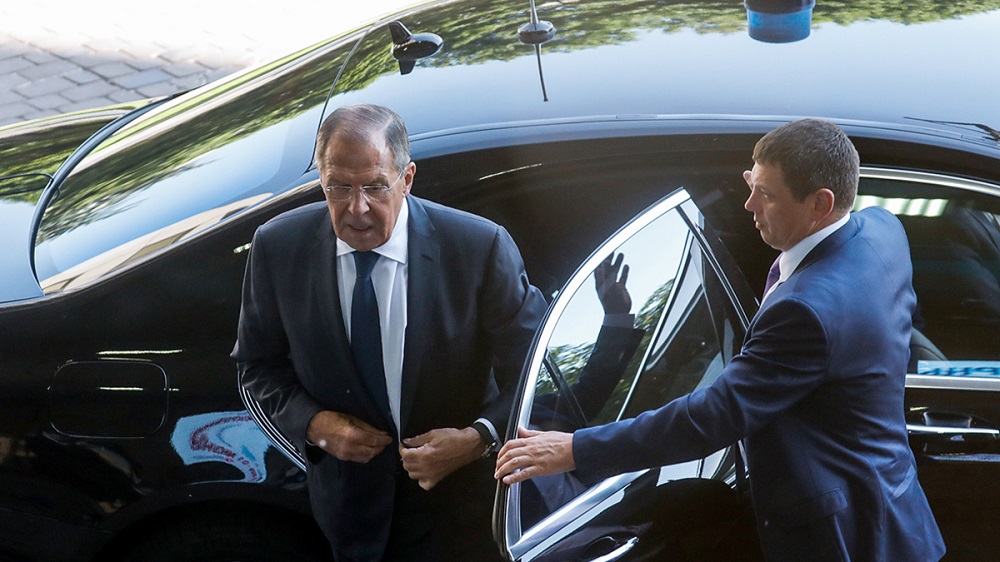 Why is Lavrov going to Yerevan and Baku?

In the first half of May, Russian Foreign Minister Sergei Lavrov is scheduled to visit Yerevan (May 5-6) and Baku (May 10-11).

Summit meetings are expected in both countries. What does this trip of the head of the Russian diplomatic department promise to the region? JAMnews collected the opinions of political observers in Azerbaijan and Armenia.

According to political observer Rauf Nasirov, Lavrov’s visit may have several goals.

“The head of the Russian Foreign Ministry, perhaps, wants to familiarize himself on the spot with the not clearly voiced claims of official Baku to Moscow in connection with the use of the Russian Iskander missiles by the Armenian side during the second Karabakh war.

Also, Baku has questions to Moscow on the activities of the peacekeepers in Karabakh.

And based on the results of his visit to Yerevan, Lavrov will draw conclusions about how firmly Pashinyan is holding on to power.”

Wreckage of Iskander missile fired at Shusha on display in Baku. Photos

The wreckage of the Iskander missile fired at the city of Shusha during the second Karabakh war was demonstrated in Baku. She exploded completely

“Moscow, perhaps, wants to reassure Azerbaijan on the issue of the Metsamor nuclear power plant in Armenia (Baku demands it be closed), while offering something in return. However, for Lavrov’s visit, this probability is unlikely – it is too ‘small’ for him.”

Persuade Azerbaijan to join the EAEU

“Perhaps Azerbaijan will once again be invited to join the Eurasian Economic Union [EAEU, created under the auspices of Russia, includes several post-Soviet countries – JAMnews]. This issue could not but be raised during the recent visit of the President of Belarus Alexander Lukashenko to Baku.

Perhaps this is bargaining – Moscow wants to offer something to Baku in exchange for full consent to Azerbaijan’s membership in this organization. I do not exclude that Turkey’s desire to join the EAEU may be probed, given Biden’s recent unsuccessful move on the issue of the so-called Armenian genocide.

Does Moscow want to increase its peacekeeping contingent in Karabakh?

Azerbaijan is actively discussing assumptions that the arrival of the head of the Russian Foreign Ministry may be associated with Moscow’s desire to increase the contingent of Russian peacekeepers in Nagorno-Karabakh – and for this to enter into a “bargaining” in Azerbaijan regarding the Zangezur corridor.

This is the road that should connect the autonomy of Nakhichevan with the rest of Azerbaijan, and it should pass partially through the territory of Armenia. This has led to permanent protests in the Syunik border region of Armenia.

“Russia will not bargain over increasing its contingent in Nagorno-Karabakh in exchange for anything. Why does she need it? The Kremlin always has a trump card up its sleeve.

For example, by the time the Russian peacekeepers’ stay in Karabakh expires [expires in November 2025 – JAMnews] Moscow will always be able to arrange any provocation between the armed forces of Azerbaijan and Armenia. This can be done with the participation of the same peacekeepers, and several of them may even die. And then Moscow will declare that it is too early to withdraw the troops. “

“Another version of what Lavrov intends to talk about with the leaders of both countries is the issue of the Armenian“ prisoners of war ”held in Azerbaijan [official Baku calls them“ terrorists ”, since they were detained after the end of the second Karabakh war and Russian peacekeepers – JAMnews].

The question, of course, will be raised by Lavrov. Its successful solution will raise Moscow’s rating before the Armenian side and present them as true peacekeepers. And Russia will be able to flaunt this in front of the entire West, and in front of the co-chairs of the OSCE Minsk Group [an international group that has facilitated the negotiation process in the Karabakh conflict since the 1990s – JAMnews].

Still, it is unlikely that Lavrov will focus on this issue. This is a difficult task, since official Baku has already said its word on this issue, – it has stated that it is not going to return the terrorists. “

Parade of Russian peacekeepers in Karabakh on May 9

The visit of the head of the Russian Foreign Ministry is built in some connection with the planned parade of Russian peacekeepers in Nagorno-Karabakh in honor of the Victory Day in World War II. The Azerbaijani society reacts sharply negatively to this, although there was no official reaction from Baku.

Lavrov will visit Yerevan before this parade – May 5-6, and will arrive in Baku after it, May 10-11.

“Azerbaijan conveyed its position to Moscow. The Kremlin decides whether or not to hold a victory parade in Khankendi [the Armenian side calls this city Stepanakert – JAMnews]. And thus, they once again demonstrate that they are not going to act in Karabakh at the will and will of any of the parties, but intend to decide everything on their own. In a way, this is a quiet demonstration of strength, ”Rauf Nasirov said.

Russia wants to relieve tension in the Caucasus

Political observer Hakob Badalyan believes that “Lavrov is trying to implement the provisions of the trilateral statement on Karabakh on November 9, 2020 and lobby for the idea of coexistence.”

“Russia really needs to relieve tension in the Caucasus, because in other areas there are too acute and serious risks for it. One of these risks is the conflict between Kyrgyzstan and Tajikistan.

An important context is Putin’s recent telephone conversation with French President Macron. They agreed to work systematically within the framework of the OSCE Minsk Group and come up with initiatives on the Karabakh issue in the coming days.

And this telephone conversation took place immediately after the recognition by the US President of the Armenian Genocide in Ottoman Turkey. “

Experts on the meaning behind Biden's statement on the Armenian genocide

How do experts in Armenia, Russia and the West assess the situation? Why did the US President use the word “genocide” when talking about the murders of Armenians in the Ottoman Empire?

Is Russia concerned about Iran’s activity and US interest in Armenia?

“Lavrov’s plans may include issues related to the military infrastructure in the Syunik region of Armenia (on the border with Azerbaijan).

It is not only the problems of defining Armenian and Azerbaijani positions, new borders or new security threats that are being resolved there. Syunik has always had a broader geopolitical significance, especially in the context of the Persian Gulf – Black Sea transit corridor proposed by Iran.

In fact, this is a question of Iran’s relations with the West. And one can imagine how jealous Russia can be about this.

For Armenia, this is a dual situation. The country is extremely dependent on Russia in terms of security, and it is difficult to think that Armenia has serious resources to oppose it.

But we also see serious signals from the US – regarding the Armenian genocide, on the status of Artsakh [Nagorno-Karabakh], on the issue of migrants. And this can help Armenia to be more self-confident and defend its interests in relations with Russia. “

According to experts, in fact, the Armenian prime minister arrived in Moscow on the eve of early elections in Armenia to enlist the support of the Russian president

“Russia wants to establish its military presence in Karabakh and is trying to get maximum guarantees from Baku for this.

In addition, Russia seeks to compete with Turkey and Iran in Azerbaijan.

Return of Armenian prisoners of war held in Azerbaijan

“The subject of prisoners of war, of course, will be discussed, since Yerevan raises this issue. And Russia is interested in solving it. But the question is to what extent she is ready to use her potential for this.

Moscow, on the one hand, does not want to take serious steps that could ruin or strain relations with Azerbaijan and Turkey. On the other hand, Russia can use this issue as a lever of pressure on Armenia, ”Hakob Badalyan said.

These are the issues that will be prioritized in discussions with the leaders of the two countries during the visit of the Russian Foreign Minister, political scientist Stepan Danielyan believes.

“I have the impression that before the second Karabakh war, in the fall of 2020, Azerbaijan gave Russia a promise to join the EAEU. And now Turkey does not allow him to do this either, and Azerbaijan realizes that it is not profitable for him.

In this situation, it plays into the hands of Baku that Armenia used its right to veto Azerbaijan’s accession to the EAEU and set a precondition – the return of prisoners. Maybe Azerbaijan does not return prisoners for this very reason. “

Nakhichevan – Iran as an analogue of the new Suez Canal

“The issue of unblocking roads through the region is also very important for Russia.

The communication between Nakhichevan and Iran is very important for both Armenia and Russia. This road will be of serious geopolitical importance not only for these two countries, but also for Iran and, possibly, India and China.

This railway will be able to connect the Persian Gulf with the Black Sea – possibly bypassing Georgia, through Abkhazia [recognized by Russia as an independent state, but Georgia, the entire Western community and the UN considers Abkhazia to be part of Georgia – JAMnews].

This is an analogue of the new Suez Canal, which Russia will lobby for. But Turkey and Azerbaijan are interested in another road – through the Armenian city of Meghri [the path that is called the Zangezur Corridor in Azerbaijan – JAMnews].

What will become of the Zangezur corridor? Comments from Azerbaijan and Armenia

Ilham Aliyev stated that if the Armenian side did not want to, the issue of the “Zangezur corridor” would be resolved by force, his words provoked an angry reaction in Armenia

It will be difficult to prevent unprofitable projects in Armenia now. Only after the change of the incapacitated government will the situation gradually change, ”Stepan Danielyan believes.

Views: 28
Related Topics:
Up Next