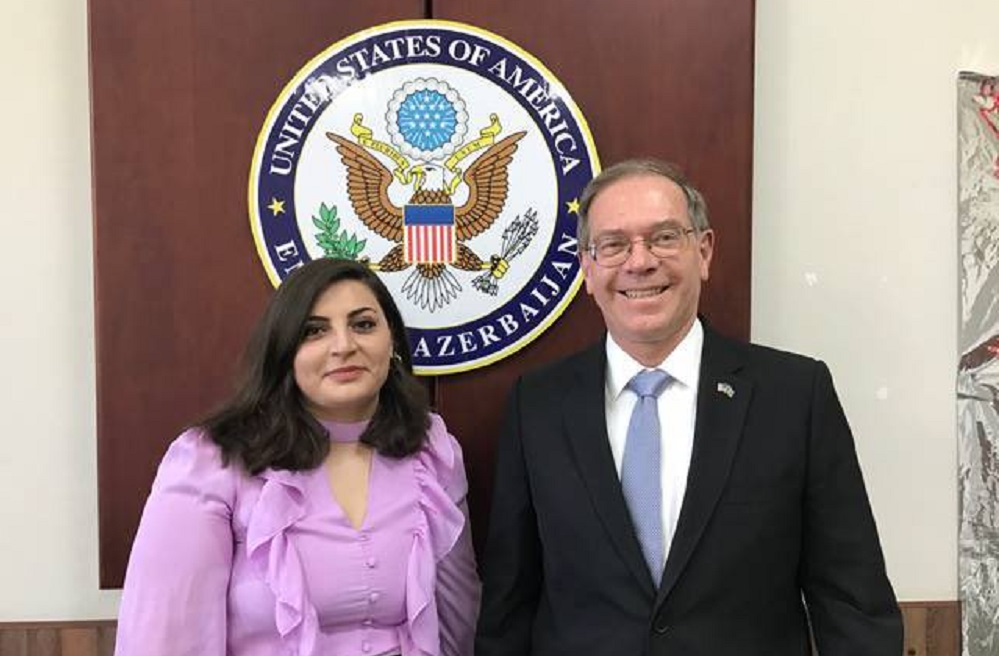 The US Ambassador to Azerbaijan, Lee Litzenberger, has met with one of the leaders of the feminist movement Narmin Shahmarzadeh and has stated the need to ensure freedom of assembly in Azerbaijan. However, the meeting sparked a wave of controversy on social media.

The official Twitter page of the US Embassy in Azerbaijan posted a photo of Ambassador Lee Litzenberger with the feminist Narmin Shahmarzadeh with the following caption:

Narmin Shahmarzade did not comment on the meeting with the ambassador on social media.

Commenting on the post, many users condemned the US Embassy for hosting Shahmarzade.

Here are some of the typical comments:

“This woman does not represent me. She, with her low moral and ethical values, cannot represent an Azerbaijani woman”.

“Until now, I have respected America. But you are disgusting, America. This is who you are meeting with”.

“If the US is concerned about human rights, then let it punish Armenia for maps of minefields and 4,000 prisoners”.

On the other hand, many users of the social media platforms in Azerbaijani positively assessed the meeting between the ambassador and the feminist:

“Despite the fact that Narmin Shahmarzadeh is the most courageous, free person in this country, she never uses her unlimited freedom to humiliate others. I regret that her values are not appreciated by society, but one day they will understand how majestic she is”.

“Never in history have great personalities been adequately received by the crowd”.

What does it mean to be a feminist in Azerbaijan?

With a new slogan “Murders of women are political”, feminists in Azerbaijani try to draw attention to the facts of domestic violence in the country

In December 2018, a post on the page of Narmin Shahmarzade, a student of the Faculty of Psychology of Baku State University, became the subject of heated discussions in Azerbaijani society.

She was sentenced to 400 hours of correctional labor for a post that questioned the legacy of Azerbaijan’s national hero Mubariz Ibrahimov.

Currently, Narmin Shahmarzade is considered one of the leaders of the feminist movement in Azerbaijan.

Not so long ago, she was subjected to cyber attacks after being detained during a protest.

Views: 100
Related Topics:news
Up Next

‘Go, look at yourselves in the mirror’ – President Aliyev on controversy around Baku war trophy park