Aslanov’s wife says he is protesting against pressure and illegal actions of the head of the penitentiary.

Meydan TV was informed of the new hunger strike by his wife Gulmira Aslanova. According to her, Aslanov is protesting against the pressure and illegal actions of Emin Hasanov, the head of Prison No. 1, where he is being held. “His telephone calls have been banned illegally. He is also not allowed to bathe. Therefore, Polad Aslanov decided to go on hunger strike in protest. He also submitted a written application in this regard”, she stated.

Aslanova says that she also informed the Ombudsman’s Office about her husband’s hunger strike in prison.

Mehman Sadigov, head of the Penitentiary Service’s public relations department, denied reports that Polad Aslanov was on a hunger strike. He also denied the allegations Aslanov was not allowed telephone calls or baths. The head of the department said that all prisoners, regardless of their identity, are treated equally and the rights provided by law are guaranteed.

Polad Aslanov has been in custody since 12 June 2019. He was sentenced to sixteen years in prison by the Baku Court of Grave Crimes for treason. The criminal case claims that Polad Aslanov secretly cooperated with Iranian special services, held secret meetings with them outside the country, and passed information and received money in return.

The editor-in-chief denies the allegations and maintains his innocence. He says he was charged and sentenced because of his critical journalistic activity, especially for writing articles about Azerbaijani State Security Service employees taking bribes from companies that visit pilgrims.

Views: 66
Related Topics:news
Up Next

Azerbaijan has exchanged 15 Armenian soldiers for the maps of minefields in the territory of the Agdam region, which came under the control of the Azerbaijani army as a result of the second Karabakh war. The exchange took place at Azerbaijan’s border with Georgia.

“According to the agreement reached, on June 12, 2021, in exchange for the provision of minefield maps by Armenia, which indicated 97,000 planted anti-tank and anti-personnel mines in the Aghdam region, Azerbaijan handed over 15 arrested Armenians with the participation of Georgian representatives at the Azerbaijani-Georgian border.

We appreciate the support of the Georgian government, headed by Prime Minister Irakli Garibashvili, in carrying out this humanitarian action. At the same time, we especially emphasize the mediating role of US Secretary of State Anthony Blinken, Acting Assistant Secretary Philip Reeker, President of the Council of Europe Charles Michel, and the Swedish OSCE Chairmanship.

Obtaining mine maps will save the lives and health of tens of thousands of our citizens, including demining specialists, and accelerate reconstruction projects initiated by President of the Republic of Azerbaijan Ilham Aliyev in Aghdam as well as the return of internally displaced persons”, the Azerbaijani Foreign Ministry said in a statement.

According to political observer Asaf Quliyev, the transfer of minefield maps to Azerbaijan in exchange for 15 detained servicemen speaks of the will of the two countries to stabilize relations and open communications in the region:

“We can conclude that the West has understood that Azerbaijan would not just return the detained servicemen of the Armenian Armed Forces. In Armenia they are called prisoners of war, in our country they are called saboteurs or terrorists.

On the other hand, it is very clear that the refusal to hand over the maps of minefields which the Armenian side had did not in any way speak of the goodwill of the other side.

Now, when the so-called deal has already been completed, it can be stated that the parties made mutual concessions, and are ready for the maximum possible normalization of relations in the given circumstances”.

Moreover, Asaf Kuliev expects the continuation of the exchanges, which will become a logical progression of the process that has already begun:

“After all, it is no secret to anyone that the contacts between the Armenian and Azerbaijani sides to resolve issues of opening communications have continued, although they were not advertised. How can communications be open if the parties do not have at least the basic trust between each other?”

At the same time, Kuliev does not exclude surprises on the transferred cards:

“It is very possible that there will be some kind of surprises. Let’s say there will be no mines where it is indicated on the maps, and there will be mines where the maps are ‘clean’. It is impossible to map everything during the tension of wartime. This must be taken into account. But 97,000 mines is a very significant figure, and this will allow the Azerbaijani side to speed up the process of demining the territories liberated from the occupation”.

Asaf Guliyev is confident that the parties will continue to carry out exchanges in the same format:

“The entire civilized world recognizes the areas held by Armenia for almost 30 years around Nagorno-Karabakh. This is also reflected in UN resolutions. It is very natural that Armenia should hand over to Azerbaijan the maps of minefields in the territories of other liberated regions in exchange for the Armenian servicemen held in Azerbaijan.

Acting Prime Minister Nikol Pashinyan announced the return of 15 prisoners of war during a pre-election meeting with residents of Gegharkunik region:

“Our task at this moment is to meet the prisoners, to hand them over to their relatives and then deal with the issue of returning other prisoners”.

Armenian human rights activists say some 200 people are still detained in Azerbaijan. Pashinyan assured voters that everything possible was being done to return the rest of the prisoners from Azerbaijan:

“I would like to apologize to those parents whose sons will not return today, for another delay in their homecoming. I hope they will treat this with understanding”.

Political observer Naira Hayrumyan emphasizes that the Armenian authorities have not yet commented on Baku’s message about the return of 15 Armenian prisoners in exchange for maps of minefields in the Agdam region:

“The topic of minefields has become especially popular in Azerbaijan lately. I suspect that the leadership in Baku is using the topic of minefields for very specific purposes. In particular, the leadership of Azerbaijan is using them to prohibit citizens, including those who came from the regions under Baku’s control, from returning to their former places of residence.

What caused this prohibition is anyone’s guess. Either Azerbaijan is not going to develop these territories, realizing that they will have to be returned, or it is preparing to create something in these territories that is incompatible with civilian life.

In addition, Baku is trying to use the issue of minefields to counterbalance Armenia’s world community’s accusations of inhuman behavior – keeping Armenian prisoners, preventing humanitarian and other international organizations in Artsakh, as well as refusing to negotiate within the framework of the OSCE Minsk Group.

By speaking of minefields, Azerbaijan is trying to show that the Armenians are supposedly cruel too. And the third reason is that in Azerbaijan they understand that they cannot keep the prisoners indefinitely, they need to be released, and it is necessary to present the “justifications” of this step to their society”.

Statements from Georgia and the US diplomats

15 of the detained citizens of Armenia have been returned by Azerbaijan in the territory of Georgia, with the facilitation of the Georgian Prime Minister Irakli Garibashvili and the US Acting Assistant Secretary Philip Reeker, Georgian government has stated.

The Prime minister of Georgia maintained constant communication with the President of Azerbaijan Ilham Aliyev and the acting Prime Minister of Armenia Nikol Pashinyan, and facilitated Armenia’s exchange of the minefield maps in return for its detained citizens.

The official statement emphasizes that that the exchnage was a “very important step aimed to improve the security situation in the region of South Caucasus that has been been made through active involvement of Georgia”.

The government of Georgia has also expressed its readiness to assist its partners in the future and be actively involved in the solution of humanitarian issues.

The US Embassy in Georgia has welcomed the release of 15 Armenian soldiers and Armenia’s decision to provide Azerbaijan with “important information that will facilitate humanitarian demining and avoid future casualties”.

In its special statement, the US Embassy has expressed its gratitude to the prime minister and the government of Georgia for “the essential role Georgia played in facilitating these steps, which bring the people of the region closer to the peaceful and prosperous future they deserve”.

“The United States is pleased to support these steps and hopes they will lay the groundwork for additional cooperation. We continue to call for the return of all detainees and stand ready to assist the countries of the region in their efforts to continue cooperation and resolve outstanding issues between them.

We also continue to urge Armenia and Azerbaijan to reengage in substantive negotiations under the auspices of the OSCE Minsk Group Co-Chairs to negotiate a comprehensive political settlement to the conflict”, the US Embassy statement reads. 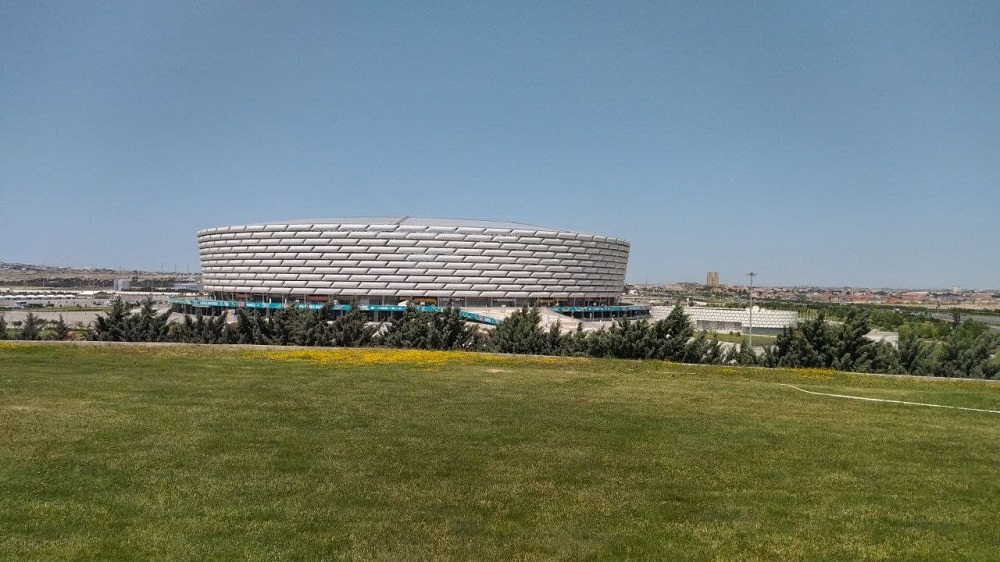 The final stage of the European Football Championship in Baku has begun. Four matches of the tournament will take place in Baku. For the first time in the history of the Caucasus, the country hosts matches of one of the most prestigious football tournaments. The football fever has been hitting the capital of Azerbaijan for several days, as it is overwhelmed by the paraphernalia of the championship and tourists.

The capital of Azerbaijan will host four matches – three group stage games, and one of the quarterfinals.

Despite the enormity of the event, Baku has not properly prepared itself to host such important football games. Until now, the central streets of the city are fenced off from the pedestrian part by partitions.

These partitions “guarded” the Azerbaijan Grand Prix track during the Formula 1 World Championship in “royal races” last week, and the organizers did not manage to clean up the city center after them.

All over the city, Euro 2020 posters hang on the streets. Although the European Championship is held in 2021, it is called Euros 2020 because it was postponed due to the outbreak of the coronavirus pandemic.

The Olympic stadium in Baku, where all four matches will take place, can accommodate about 70,000 spectators, but UEFA has only permitted 50% percent of the capacity to be used. Thus, a maximum of 35,000 spectators can attend each game in Baku. But for the first match between the national teams of Switzerland and Wales, only half of this quota was sold. Ticket prices also played a significant role in this. They cost from 60 to 250 manats [approximately $35.3 to $148].

JAMnews walked the streets of Baku just several hours before the start of the first match. 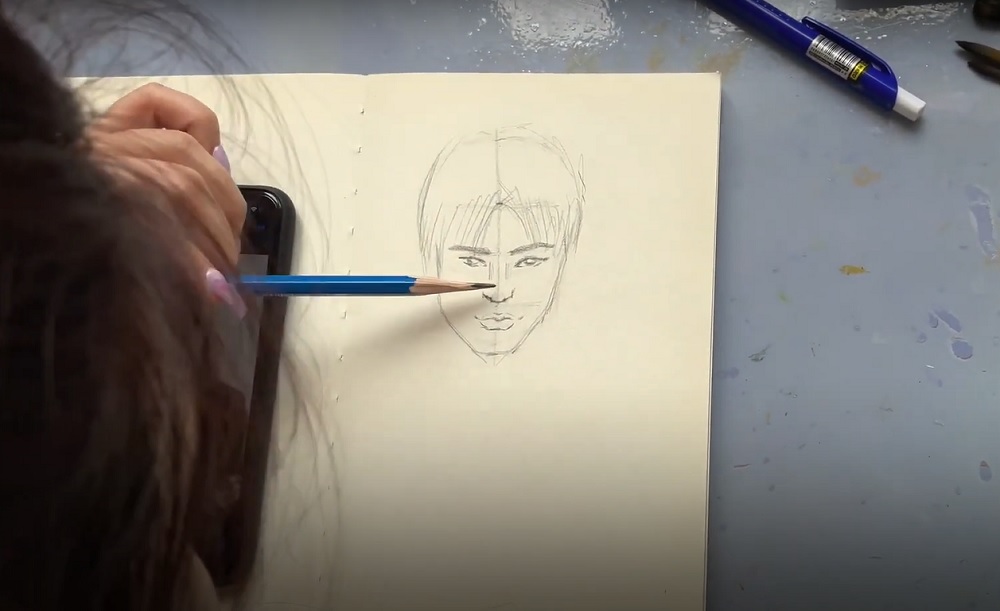 A lot of people decided to learn how to draw during the Covid-19 imposed quarantine.

Here is a vlog of a girl who is learning how to draw herself and is also teaching others at the same time.