Ambassador Peter Michalko presented a copy of his credentials to Jeyhun Bayramov.

The minister congratulated the EU representative on his appointment and expressed confidence that he would contribute to the further development of relations between Azerbaijan and the EU.

The sides exchanged views on the existing fruitful cooperation between the EU and Azerbaijan, including recent high-level visits to Azerbaijan, preparations for the upcoming Eastern Partnership meetings, a new agreement that will form the legal basis for bilateral relations.

The officials also discussed various issues on the agenda of cooperation between Azerbaijan and the EU, including the implementation of projects in the energy sector and the expansion of collaboration in this field.

Michalko said that Azerbaijan is an important partner for the European Union, and he will spare no effort to develop these relations in all areas.

Bayramov informed the EU ambassador about Armenia's aggression against Azerbaijan and its consequences, unconstructive approach to resolving the conflict over the past 28 years, the liberation of the Azerbaijani territories thanks to the Second Karabakh War, restoration and construction work in these lands, and future development plans.

The sides also exchanged views on other issues of mutual interest. 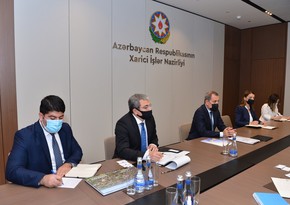 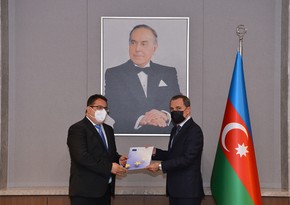 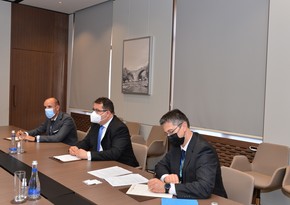 Views: 28
Related Topics:
Up Next

Azerbaijani MP: We do not need such peacekeepers

All types of vehicles will be restricted on some streets and avenues on September 26 and 27 to ensure safety in connection with the events dedicated to the Day of Remembrance, the State Traffic Police Department of the Baku Main Police Department told Report.

The event will take place in the capital on the occasion of the Day of Remembrance from 09:00 to 13:00: "The event is planned to be held in the direction of Azneft Circle, Neftchilar Avenue, Kovkeb Safaraliyeva, Yusif Safarov, Uzeyir Hajibeyov, Zarifa Aliyeva, Parliament Avenue, Mehdi Huseyn, Teymur Elchin, Istiqlaliyyet streets, White City Boulevard. Therefore, traffic in these directions, on parallel and adjacent streets, will be restricted for all types of vehicles. We ask citizens not to use personal vehicles."

Souvenir coins made of pure gold with a portrait of German Chancellor Angela Merkel to commemorate the end of the 16-year era of the chancellor have been put on sale in Germany, Report informs, citing RIA Novosti.

Germany will hold elections to the Bundestag on September 26. The new government will be formed, and a new chancellor nominated based on the results of the elections.

The international community should give 20 months to the Taliban movement that seized power in Afghanistan before judging their rule, the newly appointed minister of economy in the Taliban Cabinet Kari Din Mohammad Khanif said, Report informs, citing TASS.

"We do not ask the world to help us or cooperate with us, as the previous regime did. The world community assisted the previous authorities for 20 years, but still, they failed. Let the world give us 20 months and then judge whether we succeeded or not," the member of the radicals' commission on culture Inamullah Samangani quoted the minister on his Twitter page.