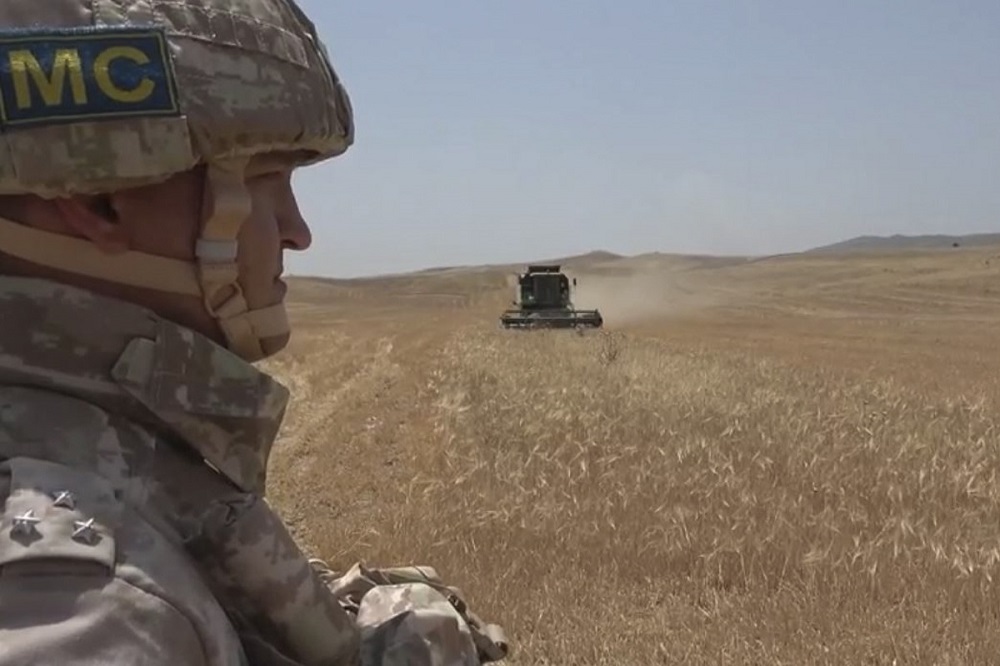 1,960 Russian peacekeepers are stationed in the part of Karabakh that remained under the control of the Armenian armed forces at the end of the second Karabakh war. The number of military personnel of the Russian peacekeeping contingent is indicated in a trilateral statement dated November 10, 2020. According to the deputy of the Azerbaijani parliament, the real number of peacekeepers there reaches 7,000-8,000 people.

“I do not want the words I said to cast a shadow on the relations between Azerbaijan and Russia, but this is a fact, and there is no secret in this. The truth is that the contingent of Russian military personnel stationed on the territory of Azerbaijan cooperates with the separatist regime, moreover, contributes to the activities of the remnants of the military formations of Armenia there, ”said the deputy of the Milli Mejlis (Azerbaijani parliament) from Khojaly [a city in the part of Karabakh located under the control of Armenian forces – JAMnews] Elman Mammadov.

According to the deputy, as per the terms of the trilateral statement of November 10, 2020, signed by the presidents of Azerbaijan, Russia, as well as the prime minister of Armenia, in parallel with the introduction of Russian peacekeepers into Karabakh, the Armenian armed forces were to leave the region:

“This was their task. But instead, the Russian peacekeepers are creating conditions for providing these forces with weapons, fuel, and food through the Lachin corridor”.

The deputy stressed that the peacekeeping contingent of the Russian Federation is not interested in ending the conflict:

“On the contrary, surreptitiously they are doing so that the conflict flared up with renewed vigor. Of course, in such conditions, Azerbaijan must take measures to stop such a course of events, and will take them”.

“Presidential aide Hikmet Hajiyev touched upon these issues, I think there are details that we do not know exactly. Discussions are underway to change the situation between the heads of state. Otherwise, these forces will turn into a source of danger for the sovereignty of Azerbaijan. Because they bring the Armenian population to this region, promising them money, food, and building schools for them. This is not the responsibility of the peacekeepers! Hundreds of millions were spent under the pretext of humanitarian aid”, the deputy added.

In his opinion, the number of peacekeepers has long exceeded the figure indicated in the trilateral statement:

“There should have been 1,960 peacekeepers. But over the past months, service personnel have appeared there, employees of various ministries of Russia – the Ministry of Health, the Ministry of Education, the Ministry of Emergency Situations. Now there are seven to eight thousand of them. But this was not indicated the statement, so what can we do? We need to answer these questions”.

Elman Mammadov also drew parallels with the current situation and what happened before the second Karabakh war.

“I wonder, where have these peacekeepers been the previous 30 years, those who are so zealous to provide humanitarian aid, build houses, return Armenians who left for Armenia during the war back to the region? Why haven’t they done this to us in the previous 30 years? I was kicked out of Khojaly in the early 90s. Tens of thousands of people like me were expelled from Khankendi, Khojaly, Agdere and other cities of Karabakh. Why didn’t they provide us with humanitarian aid, why didn’t they return us to our homes? On the contrary, now they are placing Armenians there. In my house.

I want to return to Khojaly. If you are a peacemaker, why not help me do it? They don’t even remember us. This is unfair, we do not need such peacekeepers”, he said in an interview with Yeni Sabah.

Views: 27
Related Topics:
Up Next

103 years pass since liberation of Baku from Armenian-Bolshevik occupation

All types of vehicles will be restricted on some streets and avenues on September 26 and 27 to ensure safety in connection with the events dedicated to the Day of Remembrance, the State Traffic Police Department of the Baku Main Police Department told Report.

The event will take place in the capital on the occasion of the Day of Remembrance from 09:00 to 13:00: "The event is planned to be held in the direction of Azneft Circle, Neftchilar Avenue, Kovkeb Safaraliyeva, Yusif Safarov, Uzeyir Hajibeyov, Zarifa Aliyeva, Parliament Avenue, Mehdi Huseyn, Teymur Elchin, Istiqlaliyyet streets, White City Boulevard. Therefore, traffic in these directions, on parallel and adjacent streets, will be restricted for all types of vehicles. We ask citizens not to use personal vehicles."

Souvenir coins made of pure gold with a portrait of German Chancellor Angela Merkel to commemorate the end of the 16-year era of the chancellor have been put on sale in Germany, Report informs, citing RIA Novosti.

Germany will hold elections to the Bundestag on September 26. The new government will be formed, and a new chancellor nominated based on the results of the elections.

The international community should give 20 months to the Taliban movement that seized power in Afghanistan before judging their rule, the newly appointed minister of economy in the Taliban Cabinet Kari Din Mohammad Khanif said, Report informs, citing TASS.

"We do not ask the world to help us or cooperate with us, as the previous regime did. The world community assisted the previous authorities for 20 years, but still, they failed. Let the world give us 20 months and then judge whether we succeeded or not," the member of the radicals' commission on culture Inamullah Samangani quoted the minister on his Twitter page.