The income gap between people living in rich and poor countries continues to widen, the indebtedness of the least developed countries is growing, and attempts to change these trends haven’t yet yielded results, President of the World Bank (WB) David Malpass said, Report informs referring to the WB website.

“The inequality in the recovery is getting worse across country groups. Per capita income in advanced economies is expected to grow nearly 5 percent in 2021, but only 0.5 percent in low-income countries,” he stressed.

“We’re witnessing what I call tragic reversals in development across many dimensions. Progress in reducing extreme poverty has been set back by years – for some, by a decade. Median incomes have declined instead of risen. It’s vital that we address these head-on by redirecting policies in both the advanced economies and in the developing countries so that growth and investment are more widespread, less concentrated at the top, and broader improvements in living conditions can be achieved,” Malpass added.

“Another priority is to address debt challenges confronting many developing countries. Today, we’re also releasing the annual International Debt Statistics – or IDS – report for 2022. It identifies a significant 12 percent increase in the debt owed by low-income countries, which reached $860 billion,” he said.

Views: 24
Related Topics:
Up Next

“War is over, and true, we are still forced to fight, we are ready” – President

"The war is over, and true, we are still forced to fight, and we are ready. In any form, as they say, on the battlefield – be it in the political or in the military arena," President Ilham Aliyev told a meeting with public representatives of Gubadli District on October 25, Report informs.

"We have already shown that we are not a nation to bow to anyone. But at the same time, we are facing huge reconstruction work ahead of us. This must be carried out in accordance with the victory gained in the war. As a whole, after this historic victory, the renewal, modernization of our country, the ongoing reforms, the fight against unpleasant situations, of course, must completely reach a new level. This Victory has both shown the whole world that we are a great nation, at the same time, it forces us in the best sense of the word to move forward only on the right path. Look, together with you, together with the whole Azerbaijani society, we will follow this path. In what status I will follow this path is now the secondary issue. The main thing is that I will follow this path for the rest of my life, God willing, together with you," the president said.

Ilham Aliyev in Gubadli: “There should only be good living in such picturesque lands”

"Thank you very much. I want to reiterate that we must have very precise plans for the economic development of Gubadli and other liberated districts. We have accumulated very good experience; state programs for the socio-economic development of the districts are being successfully implemented. Several programs have already been implemented, and taking advantage of that experience, of course, very proper planning must be done in this region," President Ilham Aliyev told a meeting with the public representatives of the Gubadli District on October 25, Report informs.

"I want to say again that there are already initial proposals for infrastructure projects, the construction of houses, and the restoration of villages. The main thing is that the people, who will return here, live well, that is, their well-being be high. Of course, the conditions for this will be created, but the areas, in which they will be engaged, must be properly identified.

The steps to be taken to achieve these goals must be taken correctly. The government has been instructed, various ministries are functioning to this end, and I am sure that the Milli Majlis will also contribute to this work. There should only be good living in such picturesque lands," the president said.

The arsenal of weapons and military equipment of the newly-commissioned military unit complex of the State Border Service (SBS) in Gubadli District includes Harop, Kuzgun, and Girgi strike drones. 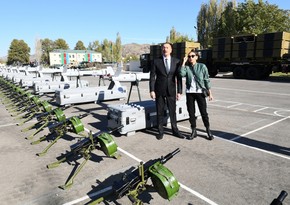 “War is over, and true, we are still forced to fight, we are ready” – President

Ilham Aliyev in Gubadli: “There should only be good living in such picturesque lands”

Tesla CEO gets richer for nearly $4 billion in a day

Over 4,000 Turkish citizens work in Azerbaijan